They recently had their national conference, and I invited Carrie Rose from the Project to write a report on what happened:

ST PAUL, MN: A mutually empowering method of home visits as a way to connect teachers and families was the focus of the Parent Teacher Home Visit Project’s (PTHVP) annual conference two weeks ago. The organization brought over 300 educators, parents, policy experts and community leaders together in St. Paul, MN in order to connect members of the national network of PTHVP affiliates, who continue to adapt and adopt the model in their diverse locations.

Evaluation and research on effective family engagement has been key to the development of the PTHVP model. So it was fitting that the organization’s annual Jocelyn Graves Award for Distinguished Service in Public Education went to two academic leaders this year: Karen L. Mapp, a senior lecturer at the Harvard Graduate School of Education, and Anne Henderson, Senior Consultant, Community Organizing and Engagement, Annenberg Institute for School Reform. In addition to works published separately, the two have collaborated on several books on family and community engagement, including the bestseller Beyond the Bake Sale: The Essential Guide to Family-School Partnerships (2007).  As researchers, they have evaluated the Parent Teacher Home Visit Project model. As authors, they have included this model of home visits as a best practice.

Presenter Michele Brooks, Assistant Superintendent of Boston Public Schools, who introduced Dr. Mapp, recounted “groups from around the country called the PTHVP office in Sacramento, asking for training, and saying ‘Karen and Anne sent us.’” The two authors were referred to by staff as “our fairy godmothers,” said PTHVP co-founder Yesenia Gonzalez, Training Coordinator, who introduced Dr. Henderson. So when the two women received the award, they were handed bejeweled fairy wands, which they immediately waved over the audience, “blessing them for their work” and “sending them to expand the magic of home visits throughout the land.”

Before the award was presented, Jim Keddy of the California Endowment stood at the podium. He shared his memory of Jocelyn Graves, for whom the award is named. In the late 1990’s, Keddy was the director of the ACT community organizing office, and Graves was a parent looking to forge a more productive relationship with her children’s school. They worked together to form the Parent Teacher Home Visit Project in 1998. A single mother with serious health issues, Graves nevertheless advocated tirelessly for her community, for HIV/AIDS awareness, and for education reform. Jocelyn Graves was a volunteer and trainer for PTHVP until her passing in 2007.

Other activities during the conference included over twenty breakout sessions aimed at deepening and strengthening the practice of home visits. Presenters were recruited from the grassroots movement, and the emphasis was on sharing best practices. For example, district leaders from Denver and Reno joined up to share their methods of visioning, planning and data collection systems, and the St. Paul Federation of Teachers led a pre-conference seminar on contract bargaining to include home visits.

Performing arts were represented as well. Tish Jones of Minneapolis brought TruArt Speaks, a poetry performance group for youth empowerment, to lead a workshop and a much applauded general session. Comedian Hari Kondabolu led a mirth-filled break-out session about telling stories with authentic voice, and later served on a panel about racial justice. The panel drew from the experience of different organizations and companies who have added racial justice to their mission, including the YWCA, Minnesota Air Pollution Control, Coalition of Schools Educating Boys of Color, and Hackman Consulting. 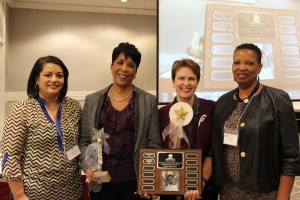 All My Best Lists On Parent Engagement

My Latest Book On Student Motivation

"Self-Driven Learning: Teaching Strategies for Student Motivation" will be a sequel to "Helping Students Motivate Themselves"

You can find out more about it here.

My Book On Helping Students Motivate Themselves